The Senator representing Bayelsa West Senatorial District in the National Assembly, Senator Henry Seriake Dickson, has been returned as the winner of the Peoples Democratic Party Senatorial primary for Bayelsa West.

While announcing the result of the election which held at the Local Government Service Commission Centre, Sagbama, the returning officer Mr Godspower Akeh, said the election had a total of 62 votes. 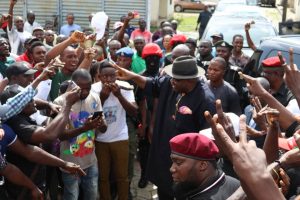 Akeh said that Dickson polled 57, to his opponents 3 while the votes of two delegates were voided for voting for both aspirants.

Dickson who spoke to journalists shortly after his victory thanked the Almighty God, the Governor and party leaders for their sustained support over the years.

He was also full of gratitude to the ‘almighty delegates’ for their abiding faith in him for the sixth time that he had contested elections and won all in the state.

He observed that this is the first time the primary process would exclude party leaders (past or present) from the critical list of delegates, and by implication excluded them from the decision-making process.

He called on the top leadership of the party to show understanding on the curious development which for the first time excluded them from the process of decision making.

Senator Dickson urged the national leadership of the PDP to take proactive steps to address what he described as an extreme and rare development in the party’s primaries.

He urged them to direct the leadership of the party in the states to come up with a process of reconciliation designed to assuage the feelings of those who are hurt by the curious development which was happening for the first time. 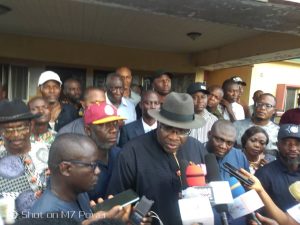 “As you know in all things, you give thanks to God for his mercies. I want to thank the leaders of our party in our state, beginning with the governor, who traditionally is the leader of the party. I thank and appreciate the abiding support and solidarity that I have enjoyed all these years from the good people of this senatorial district and the elders of our party who have always been solidly behind us.

“Today, I thank the organizing team that came with the party leaders, I thank INEC and the security people for providing a very conducive atmosphere and I thank the all mighty delegates, they are our bosses in this process. Let me say as someone who has contested a number of elections, this is the sixth time I am on the ballot on the platform of the PDP. So you can understand why this party is special to some of us and why over the years, particularly from 2015 against all odds, we never spared anything to keep this party from the control of our state.

“In all these six times, this primary process has proved to be very different. This is the first time that leaders of our party, previous and serving are not delegates. They are not part of the decision making process. You all understand why it is so and that I know as someone who has administered the party, who has contested several elections, I know it portends some challenges for our party.

“I want to plead for understanding on the part of all the leaders, who for the first time are not part of the nomination process of our party.

“Leaders of our party, office holders, legislators, governors, even party executives, because of this special circumstance are not part of the decision process. This is the first time in the history of our party that a few number of people, have to determine the fate of leaders.

“So I want to call for understanding on the part of our leaders because I can feel the pain and the pulse of people. I can also appreciate the feelings of those who have lost out one way or the other because of the numbers involved. Six people, Nine people, Twelve people now have to elect the flagbearer of the Constituency.

“This is a call I am making to the national leadership of our party. We are all stakeholders and they should take note of this very extreme and rare development. They should ensure that party leaders in all our states are directed and enjoined to unfold a program of reconciliation to assuage the feelings of those who have been hurt by the decisions that ordinary members of our party from the grassroots have to make about their fate. It has never happened before. We understand why it is so.

“So, I know the feelings and as a major stakeholder, I want to use this opportunity to call for understanding because if I don’t, who will? We want our party to survive, to be strong and to win elections.

“I call for understanding on the part of those who may have ill feelings and to say that we should rally behind those who have won, rally behind leaders of our party so that together, we can move to sure victory.

“As you all know, this is a PDP State and I count on all your support as we join the Governor, who is the leader of our party in the state to campaign for all our candidates.”